The History of the Maenporth Estate 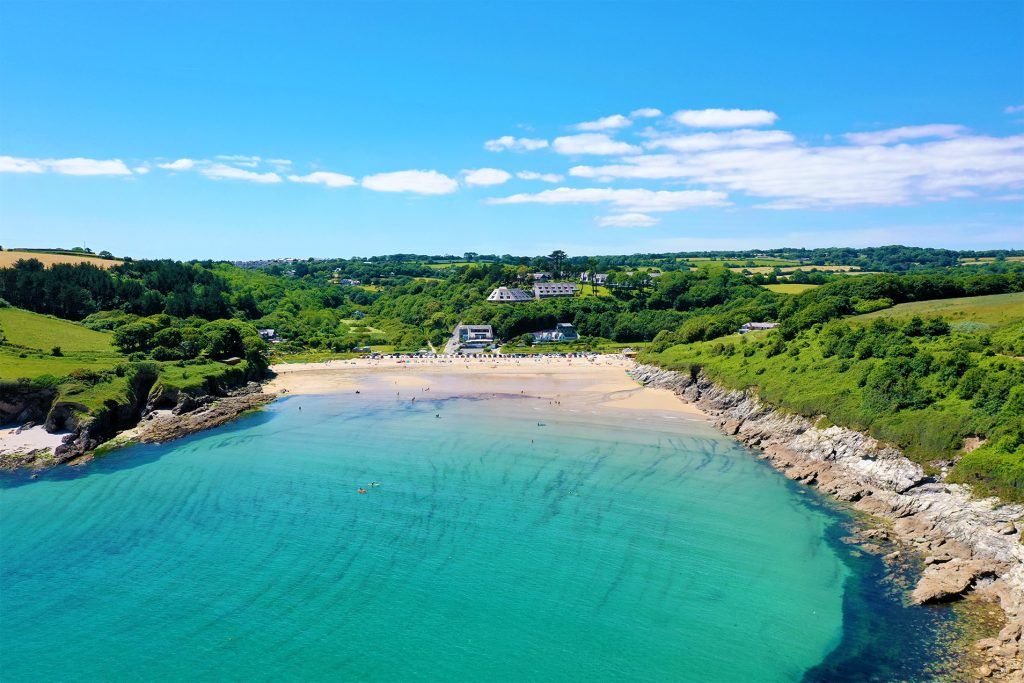 Unbeknown to many locals, the beach head of Maenporth was once a natural harbour. It has been built up with sand over the years due to the easterly weather, remnants of human activity dating back to the middle to late bronze age were also discovered. The heritage environment records indicate a forest terrain beneath the sandy cove and a total of seven bronze age ancient burial mounds were found by aerial surveys. This can suggest that the area was a significant settlement and trading base in the mid to late bronze age. Maenporth cove would have been a well sheltered area for vessels to seek refuge against the westerly weather and would have probably used the two flooded valleys above the beach head as a point of trading, the likely commodity would have been tin brought overland from the west.

Unfortunately, sand now obstructs the harbour entrance which is thought to be on the south end of the inlet, this is also where a stone quarry was discovered with trackways leading west past the creeks and riverhead off the Helford towards Helston and Penzance, however this has also been obscured by blown sand.

Before the Estate developed into the holiday cottages we see today, it was the summer house (pleasure ground) for the Tudor mansion known as Rosemerryn House, which was founded in 1248. It wasn’t until 1836 that the summer house (known shortly after as the Crag) was separated from the Rosemerryn estate and later sold to the Fox family of Glendurgan who also governed the Penjerric estate. However, the two tracks which linked Rosemerryn house, and the estate still exist today.

The Penjerric estate is one of Cornwall’s little gems, the Fox family purchased the 15-acre estate in the 18th century to serve as a summer residence, the family were avid gardeners and were keen to introduce new species of plants to the Penjerric estate, this is also evident in the surrounding areas, the Fox family were also responsible for Glendurgan and Trebah gardens.

In 1840, John Sterling retreated to Falmouth while awaiting a ship heading to Maderia, however his departure was short laid. John was a charismatic man who had a background of poetry and writing, and he seemed to have made a substantial impact on Falmouth and the surrounding community. Sterling’s witty and controversial writings were published in the Times and the Morning Chronical, this drew the attention of Barclay and Caroline Fox. John seemed to enjoy his stay in Falmouth and in 1841 he bought a property there. Here he lectured to acclaim at the Royal Cornwall Polytechnic Society (founded by the Fox family). Through several Misfortunes John found him self a widower with 7 children and in particularly bad health. After the death of his wife Susannah, Stirling, and Caroline fell in love and in 1844 John proposed to Caroline, Caroline who was torn by love and faith declines the offer much to her parents concerns of marrying such a man of ill health and who was not quaker.

This decision results in many years of unhappiness for Caroline. Unfortunately, it was in that same year that Sterling passed away. Caroline threw herself into being a guardian for Sterling’s two daughters Julia and Hester Sterling, providing a home for the two girls. It is not known if the two sisters bought the Crag or they just lived there, but in 1872 the two sisters commissioned Alfred Waterhouse to design ‘The Crag’ – a house perched on the cliff above Maenporth Beach. Alfred Waterhouse also designed the Natural History Museum. The two Sisters became aunts by courtesy and remained in the Crag until 1911, when the two sisters had passed away, ‘The Crag’ and grounds went up for auction in 1938 for £7650. It was eventually sold to the Black family, previously based in Sri Lanka. The Blacks hired 21 gardeners to cut out the woodland paths and made much of the dry-stone wall from the quarry within the grounds using the donkeys for transportation. A key feature of the time are the tall fir trees which still dominate part of the grounds, the Blacks also introduced an array of exotic plants we can now see on the estate today; the Crag became the hotel and Rosemerryn house became a private residence. At the point of sale, the middle portion of the beach (though it is not quite in the middle) went with the sale of the Crag, while the remaining part of the beach stayed with the Fox family.

During WW2 ‘The Crag’ was commandeered to house the soldiers. During this turmoiled time there was a national emergency for seaweed that would have been primarily sourced from Japan. It was within Maenporth cove that extracts of agar Gonothy Raea was used in the culture of penicillin and vaccine production. Fortunately, local history books report that the area did not suffer to much from enemy action, however several high- explosive bombs caused damage which fell near Maen valley, just a short distance from Maenporth. Strategically placed defences including pill boxes were placed around the Maenporth area and can still be seen today, it is also known that the beach was covered by barbed wire, scaffolding type materials, and sections of concrete were used in order to resist an invasion by the sea.

It was after the war that ‘The Crag’ became known as a hotel which was around the same time the beach café opened in 1950. It was also around this time the Seahorse Inn was built at the bottom of the driveway, which is now known as Michael Caines’ ‘The Cove Restaurant.

Unfortunately in 1978 Ben Asdale, a Scottish freezer Trawler, ran aground in Maenporth Bay at Newporth Head due to fierce gales and stormy seas. The Trawler was off loading fish into a Russian factory ship which was anchored into the Falmouth bay. Once finished discharging the mackerel, she cast off her stern rope, the rope fouled her rubber and didn’t respond to the helm, the ship went adrift and soon struck the rocks of Maenporth beach, 3 crew members were pulled to safety but unfortunately 3 disappeared and tried to swim for shore but they didn’t make it. The remains of this ship wreck can be seen at low tide and has also provided a great spot for snorkeling. More information of the Ben Asdale can be found here: https://www.submerged.co.uk/asdale/

On 1st December 1981 a fire broke out in ‘The Crag’ causing damage to over 80% of  the hotel. The damage caused the building to be irreparable and in 1986 the Estate was sold to the Pilkingtons and the foundations for the development of the Estate began, as the site is in an Area of Outstanding Natural Beauty it was important that the buildings used local and fitting materials, most people were pleased with this decision, the careful intergration of buildings and landscape was recongonised by a national award in 1993. ‘The Crag’ was demolished and became The Crags apartments we see today.

The Estate was finally completed in 2002. In 2004 Pilkingtons sold the freehold of the Estate to the property owners which is how it remains today.

Get updates and find out more

The History of the Maenporth Estate

Natural Harbour: Unbeknown to many locals, the beach head of Maenporth was once a natural harbour. It has been built up with sand over the 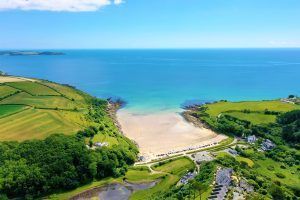 90 privately owned holiday homes set in 29 acres of mature gardens and woodland, many with superb coastal views. Enjoyed by visitors from around the world. Maenporth – the perfect place for a holiday.